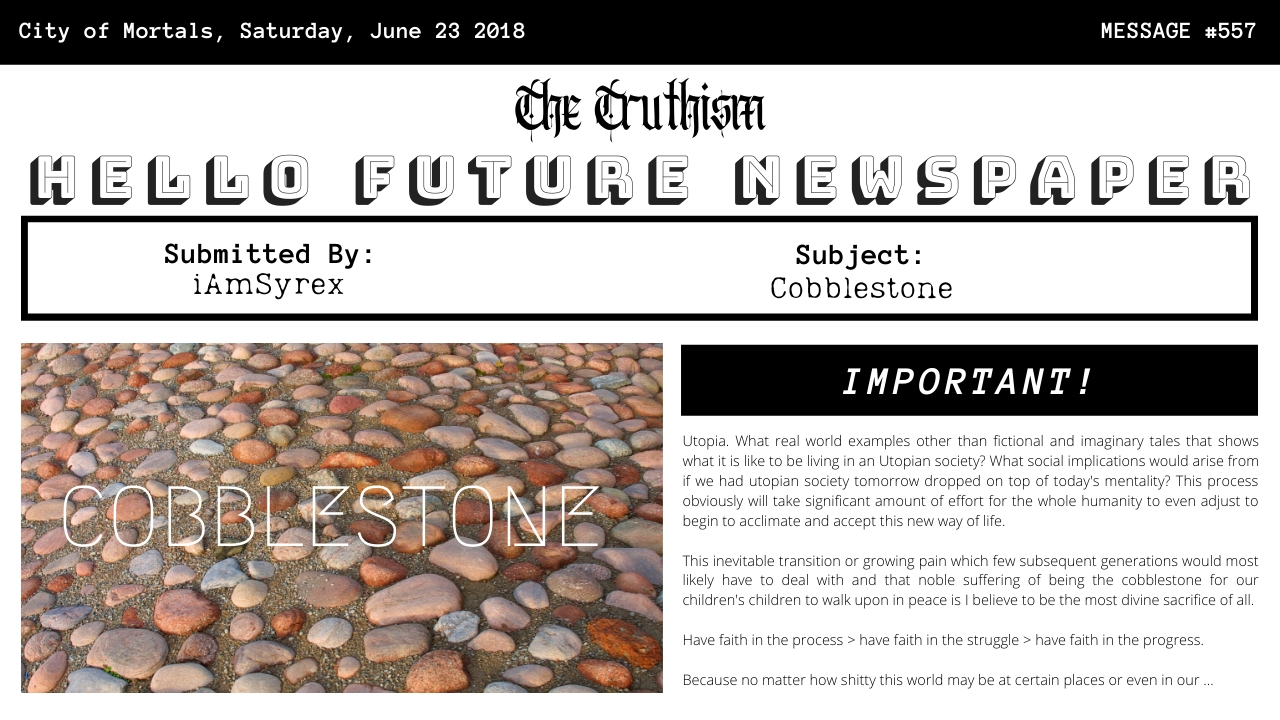 Utopia. What real world examples other than fictional and imaginary tales that shows what it is like to be living in an Utopian society? What social implications would arise from if we had utopian society tomorrow dropped on top of today’s mentality? This process obviously will take significant amount of effort for the whole humanity to even adjust to begin to acclimate and accept this new way of life.

This inevitable transition or growing pain which few subsequent generations would most likely have to deal with and that noble suffering of being the cobblestone for our children’s children to walk upon in peace is I believe to be the most divine sacrifice of all.

Because no matter how shitty this world may be at certain places or even in our everyday and immediate lives, I believe that THERE ARE ENOUGH GOOD PEOPLE DOING ENOUGH GOOD THINGS for it to still survive and be at the level that we are at today.

No sentient being in the history of the universe as we know it has ever found the blueprint of saving the world or bringing peace upon it but doesn’t mean we shouldn’t have faith in those who have tried and are trying or the efforts of whom we are not aware of yet.

With this hopeful attitude in the back of our minds that even if we may not find the meaning of life, doesn’t mean our future generations can’t. Therefore, let’s at least pave the way for them so they can have a better chance finding what we understandably and inevitably couldn’t as we are a single cobblestone of the still under construction path of our collective evolution.

Let us take one for the humanity.

This post in part inspired by “Japanese seniors volunteer for Fukushima ‘suicide corps'” where older generation’s engineers volunteered to work on the Fukushima plant so that future (younger) people don’t have risk their lives.

p.s. How do you convince a whole humanity or even just our current society to sacrifice their wants for the needs of the children of the future?

Progress update of the simmer