Thought before the thought. (Part I) 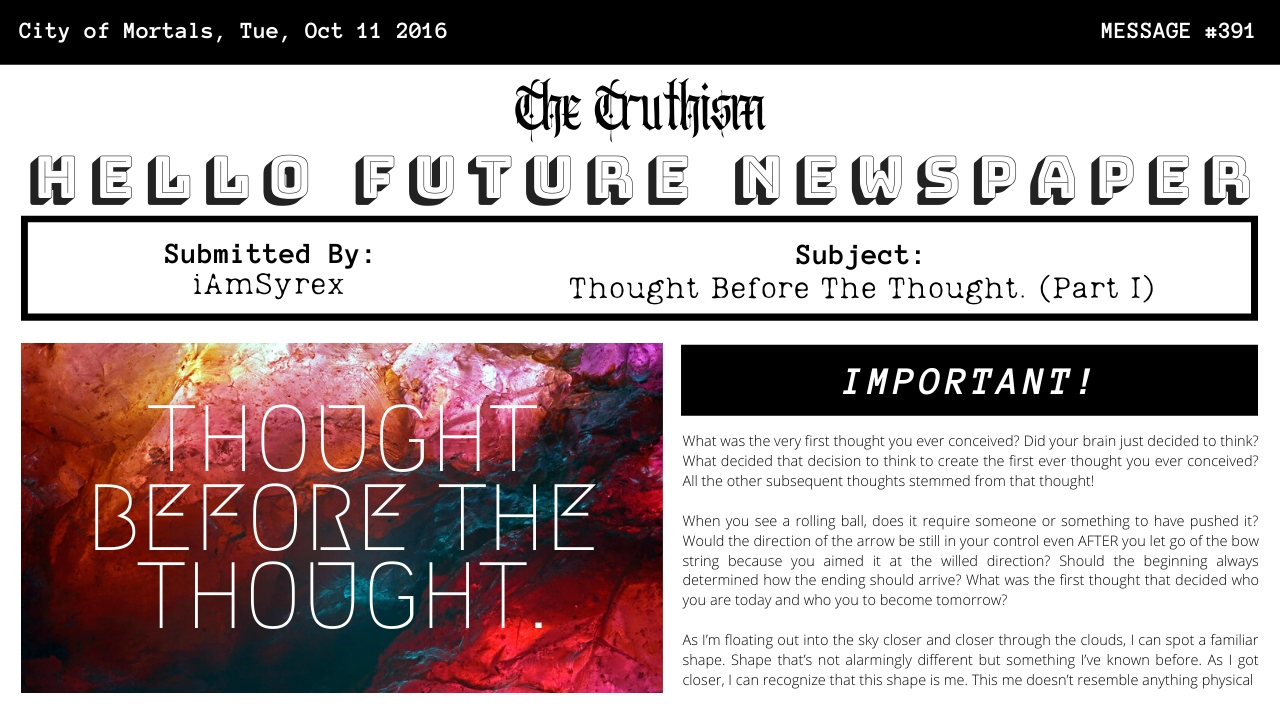 When you see a rolling ball, does it require someone or something to have pushed it? Would the direction of the arrow be still in your control even AFTER you let go of the bow string because you aimed it at the willed direction? Should the beginning always determined how the ending should arrive? What was the first thought that decided who you are today and who you to become tomorrow?

As I’m floating out into the sky closer and closer through the clouds, I can spot a familiar shape. Shape that’s not alarmingly different but something I’ve known before. As I got closer, I can recognize that this shape is me. This me doesn’t resemble anything physical of myself but every idea, every identity and everything that I think all balled up into one bright gray cluster.

Neither of us can speak through sound but I understand everything it’s communicating to me clearly.

Your thoughts define what state your whole being is in. You are the individual thought this universe is thinking about and all individual thought originated form a single thought. What is the purpose of the thought you ask? To understand. This universe is very young therefore so are you. You are all individual thoughts stemmed from one original thought. Imagine if you will, every thought in your head fights with one another to get accepted by the brain to be projected and manifested into reality. Every day, thoughts are fighting over who’s the most important thought of them all not understanding WHY you’re being able to think in the first place and that’s the key to all of this. Return to the innocence. Return to the beginning. But first….

I feel something pulling down on my leg as I feel myself falling back into the earth. More I thought about what this thing that’s pulling me by my leg, more I realized that this thought of pain from my leg going numb became more important than the current thought of … whatever.

These “communications” were more of a bucket full of just meaning and understanding bunched together at once. These words aren’t given word for word but more of a decyphering of the realization. The inkblot from the movie Arrival would come close to describing what these understandings were.

Now, imagine these circles are a combination of ideas, not words, but fully fleshed out understandings. This isn’t a way of communication using words which could be interpretted differently  by differen persons depending on the person but these circles represented as a way of understanding. The thoughts and words that articulated and decyphered the SIGNATURE of the COMPLETE UNDERSTANDING/REALIZATION came afterwards. These understandings were a less potent form of epiphony.

Progress update of the simmer