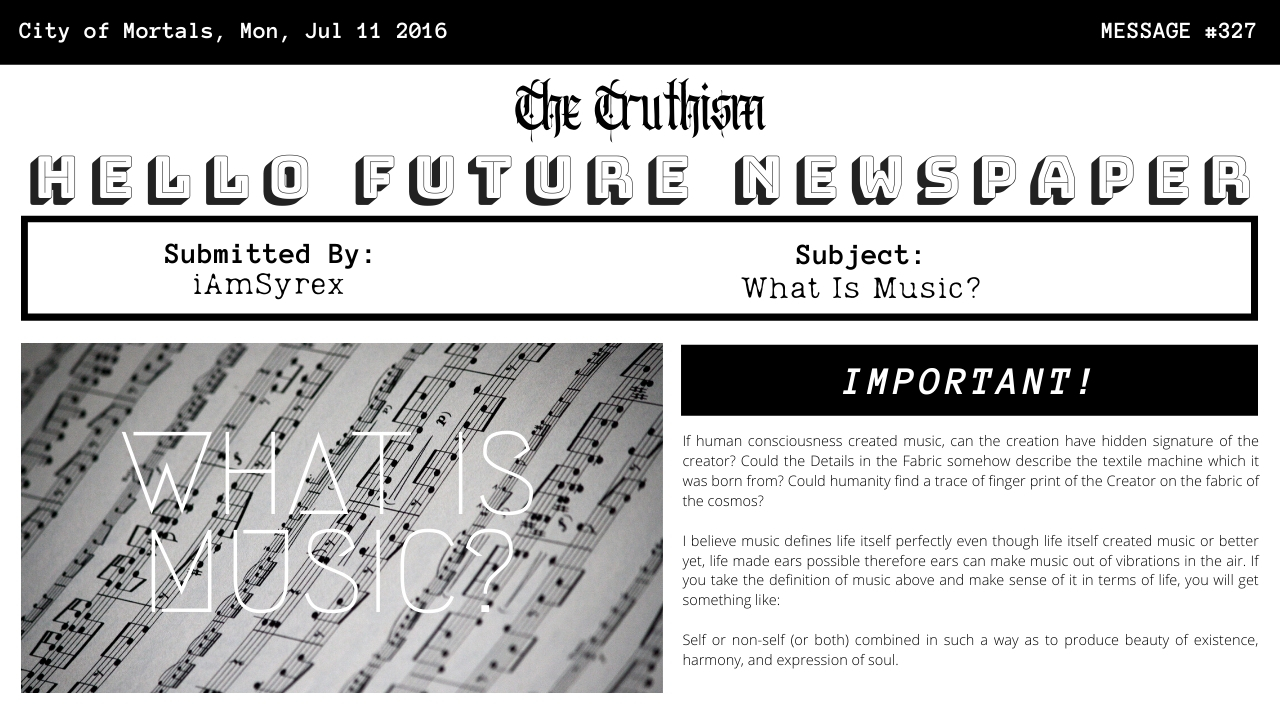 If human consciousness created music, can the creation have hidden signature of the creator? Could the Details in the Fabric somehow describe the textile machine which it was born from? Could humanity find a trace of finger print of the Creator on the fabric of the cosmos?

I believe music defines life itself perfectly even though life itself created music or better yet, life made ears possible therefore ears can make music out of vibrations in the air. If you take the definition of music above and make sense of it in terms of life, you will get something like:

Self or non-self (or both) combined in such a way as to produce beauty of existence, harmony, and expression of soul.

If you take each note of a beautiful musical piece as individual days of life, there are always ups and downs, lows and highs. It’s always wiggly and never static. If a music only had 1 note, it would not be music. If everyday were always the same, life wouldn’t be the life as we know it. When we’re listening to a music, it’s not the highest note of the piece nor about reaching the end of the music as if the shortest songs are better, but it’s about enjoying the whole process from begining to the end. When we’re living our lives, it’s not about waiting for the weekends or certain time in the future, but living for the now.

This is a simple yet very beautiful piece of music and below is a video of Yo-Yo Ma, Kathryn Stott performing it live in a concert hall. When you’re watching this video at around 2:23 where Mr. Yo-Yo Ma is at the note I’ve circled above, he happens to hold on to that note about half a second too long which is bad in no means but I believe it is a representation of longing for that moment where you wish you could stay with it as long as you could similar to when you’re having the best day of your life and you wish you could have it for the rest of your life. You could watch the studio version here and compare both to really hear the difference.

As a musician myself, I’ve experimented with this idea that I would hold on to a certain part of a music where I like the most and to see how long I could long for that moment without ruining the whole song. Sooner or later though, I had to move on with the flow of the song or else the song loses its meaning as it ends at that moment.

So I believe, we all should take every moment of life how as precious as we do with the best moments of our lives because if it wasn’t for all the moments that lead to that best moment, you wouldn’t have the moment that you’re having today.

Cherish everyday no matter how low you may feel, because eventhough it maybe a bad day it will never be a bad life.